Elsie Lovelock is a British singer and actress. She provides the singing voice of Charlie in Hazbin Hotel. She also did scratch track voices for the female characters in Helluva Boss.

She has voiced in several video games and series such as Death Battle, Attack of the Cyber Octopuses. 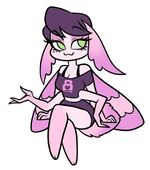 Retrieved from "https://hazbinhotel.fandom.com/wiki/Elsie_Lovelock?oldid=26240"
Community content is available under CC-BY-SA unless otherwise noted.