The Pilot
The Hazbin Hotel, formerly known as the Happy Hotel, is a rundown hotel owned by Charlie, and located in Pentagram City within Hell. It appears to be a mansion of sorts formerly owned and inhabited by the Magne Family before its transformation into a hotel, judging by the various pictures of Charlie and her family on the walls of the establishment.

The Hazbin Hotel was opened by Charlie and her friends in the pilot, and aims to redeem demons and send them to Heaven via rehabilitation, thereby curbing their ongoing overpopulation problem.

The hotel suffers ongoing mockery and criticism from Hell's denizens, most notably Katie Killjoy, who deem the idea laughable.

As revealed in the prequel comic, the building is repurposed, previously belonging to Charlie's family, who abandoned it prior to the pilot. Pictures depicting Charlie and her family are scattered around the hotel's confines. The building's interior is in a state of disrepair, indicating that it may have been abandoned some time ago.

The Hazbin Hotel exterior is a tall, elaborate amalgamation of arched windows and turrets, one of which seems to be broken. It appears to be at least seven stories tall, with at least five of which being guest floors.

Three signs are displayed outside the hotel: One atop the entrance reminiscent of the Hazbin Hotel logo, a large pink one atop the building with the hotel's name in lights, and a neon 'HOTEL' sign at the bottom right.

The Entrance has a trail that leads to a tent. There is no actual door for this hotel, it seems to be broken. Level 1 and 2 seem to be relatively normal, but then you see a train with broken tracks and a rusty boat. Next to the boat are some bells and an arrow that points to 'happy hotel'. There are also 2 dead trees next to the hotel.

The hotel's interior is shown to be in a state of disrepair, with wooden boards covering shattered windows, signs warning of asbestos, bloodied tools left lying around, and paintings are shown hanging off the walls. However, the overall theme of the building remains ornate and regal, with stained glass windows, lavish furniture, and generous usage of gold. Like the rest of Hell, the hotel has a red color scheme.

The Caviar Bar uses skeletons, snakes, and bones as general themes, along with card suits and candles, and advertises itself as a casino. Though the sign is cut off in the shot, the word 'concierge' can be presumed to be shown above the bar, and Alastor calls it the front desk when talking to Husk, suggesting that it is also the check-in counter.

There are many apple and circus motifs throughout the hotel's interior, in reference to the Magne family, or, more specifically, Lucifer Magne. Eyes are also a recurring theme throughout the building, appearing on the frame of almost every single painting.

At the end of the Pilot, the sign name is changed from the Happy Hotel to the Hazbin Hotel by Alastor. 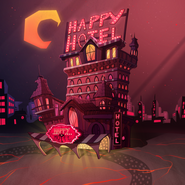 A prototype design for the hotel.

Retrieved from "https://hazbinhotel.fandom.com/wiki/Hazbin_Hotel_(location)?oldid=36054"
Community content is available under CC-BY-SA unless otherwise noted.