This article is a stub. You can help Hazbin Hotel Wiki by expanding it.

The Pilot
Imp City is one of the cities of Hell and the primary setting of Helluva Boss. In Hell, the imp demons are the lowest in society and they, along with Hell's homeless, live in this district. It houses the I.M.P. office building. 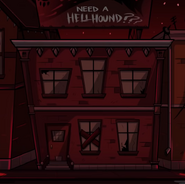 The apartment where Millie and Moxxie live.

The I.M.P Headquarters.
Add a photo to this gallery

Retrieved from "https://hazbinhotel.fandom.com/wiki/Imp_City?oldid=40101"
Community content is available under CC-BY-SA unless otherwise noted.