Inside of Every Demon is a Rainbow

Inside of Every Demon is a Rainbow

Inside of Every Demon is a Rainbow is a song produced for Hazbin Hotel. It was officially released on October 5th, 2018, as a promotional video for the show. The song is sung by Charlie while pitching her idea for the hotel on 666 News. It is available on Spotify, Amazon and iTunes.

A reprise sung by Alastor is featured near the end of the pilot when Alastor convinces Charlie he has her best interests in mind.

I have a dream,
I'm here to tell.
About a wonderful, fantastic new hotel
Yes it's one of a kind, right here in Hell
Catering to a specific clientele
(Oooh-ooh-ooh)

We can turn them 'round!
They'll be heaven-bound!
With just a little time down at the Happy Hotel!


So, all you junkies, freaks and weirdos,
Creepers, fuck-ups, crooks, and zeroes,
And downfallen superheroes, hope is here!

All of you cretins, sluts and losers,
Sexual deviants and boozers, and prescription drug abusers
Need not fear
Forever again
We'll cure your sin
We'll make you well, you'll feel so swell
Right here in Hell, at the Happy Hotel!

There'll be no more fire
And no more screams,
Just puppy dog kisses, and cotton candy dreams,
And puffy-wuffy clouds, you're gonna be like "Wow!"
Once you check in with meeeee~!

All you monsters, thieves and crazies,
Cannibals and crying babies,
Frothing mouth that's full of rabies,
Filled with cheer!

You'll be complete! It'll be so neat!
Our service can't be beat! You'll be on easy street! (Yes!)
Life will be sweet at the Happy Hotel~! 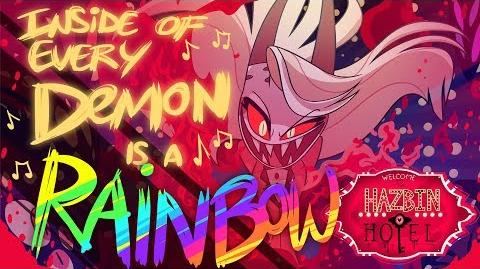 Inside of Every Demon is a Rainbow
Add a photo to this gallery
Retrieved from "https://hazbinhotel.fandom.com/wiki/Inside_of_Every_Demon_is_a_Rainbow?oldid=26293"
Community content is available under CC-BY-SA unless otherwise noted.