Mick William Lauer, also known as Ricepirate, is a Taiwanese-American animator and actor. He along with Stamper are a part of a podcast called SleepyCabin on YouTube.

He is the English voice actor for Husk in Hazbin Hotel.

Lauer was born in Woodinville, Washington, USA, and raised in Asia. He graduated of New York University's Tisch School of the Arts for performance studies, with three years of conservatory training from the Atlantic Theater Company, one year at the Royal Academy of Dramatic Arts (London), a final year focusing on film & television performance with the StoneStreet Studio, and additional training in improvisation at UCB (NYC).

Mick got a start on his career on the site Newgrounds where he became very popular for his parody animations, most notably, Dot Dot Dot. He continued doing animations on his YouTube channel. 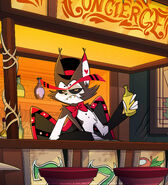