View source
watch 01:33
House of the Dragon Trailer - The Loop
Do you like this video?
Play Sound

Obsolete information ahead.
This article is on a subject that exists in an online/older project and is most likely outdated. The information below has been modified following theory debunk streams and the pilot, but may contain unconfirmed parts that may not be accurate anymore.

Molly is Angel Dust's twin sister and Arackniss's younger sister.[1] She has yet to make an appearance in Hazbin Hotel.

In her old appearance, Molly, like her twin brother, Molly is brightly colored, has four arms, and has three spots under her eyes to resemble how a spider normally has eight eyes. She has big voluminous hair that is supported by a hairband, she wears a double shoulder-padded suit with sleeves that extend to the palms of her upper set of hands, she wears striped gloves that reach the arms of her lower pair of hands. Unlike Angel, who only possesses four arms and two legs, Molly possesses two sets of legs as well as an additional set of arms.

Angel is Molly's twin brother. It's unknown what sort of relationship the two have outside of being blood-related.

Vivziepop stated that their relationship is positive and that she can't say much because a lot of that is after the Pilot.[2]

Arackniss is Molly's older brother. It's unknown what sort of relationship the two have outside of being blood-related, although it is implied to be negative.[3]

Molly is confirmed to have a father, but it's unknown what sort of relationship the two have outside of being blood-related.

Molly is confirmed to have a mother, but it’s unknown what sort of relationship the two have outside of being blood-related. 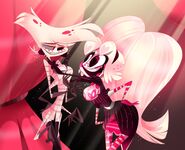 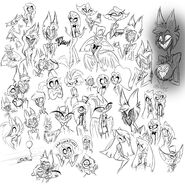 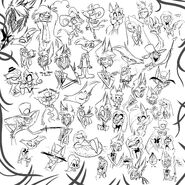