This article is a stub. You can help Hazbin Hotel Wiki by expanding it.

Stolas's Grimoire is an arcane book belonging to Stolas used by the I.M.P company to illegally access the living world.

The Grimoire has a navy blue cover with gold reflective pages separated by a dark burgundy ribbon, and has golden borders with a large red gem on the spine. The front cover is emblazoned with a moon encircling the Goetic seal of Stolas, along with a few stars.

When used, the portal glows red on the rim. However, in the episode "Loo Loo Land", it is shown for a second that the portal can be different colors such as blue, though the book was held via Stolas's telekinesis at the time, suggesting it was activated by his magic.

In the series pilot, it had a burgundy cover with dull yellow markings and the crown symbol that is on the walls of Stolas's mansion on the front and white pages.

The exact nature of the Grimoire isn't clear, but Stolas was entrusted with it to carry out unknown duties in Hell, and one of its abilities is to allow the opening of portals between Hell and the living world.

Eventually, it came into the possession of Blitzo, I.M.P's founder, where it became an essential part of the company's business model of travelling to the living world to assassinate targets on behalf of souls damned to Hell. How exactly Blitzo came to have the Grimoire is unclear, as in the series pilot, it's shown that Blitzo stole the book off Stolas after sleeping with him, while in the first episode "Murder Family" Stolas implies he lent it to Blitzo, albeit with the vague remark of "less than legally", hoping to bribe Blitzo with its use for continuing their monthly affair.

In the episode "Harvest Moon Festival" one of Stolas's duties with the book is shown as he travels to the Wrath Ring for the harvest festival. There, as part of the ceremony celebrating the harvest, he uses the book to open a portal showing an actual Harvest Moon though this seems to be mostly for ceremonial purposes.

Pilot version of the Grimoire 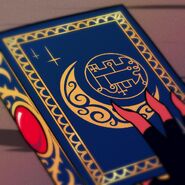 Retrieved from "https://hazbinhotel.fandom.com/wiki/Stolas%27s_Grimoire?oldid=41190"
Community content is available under CC-BY-SA unless otherwise noted.