Yoav Landau, more commonly known as The Living Tombstone is a popular musician and producer best known for his remixes and original music composed for a variety of fandoms including My Little Pony, LazyTown, and Five Nights at Freddy's. It consists of Yoav Landau (producer), Sam Haft (vocalist), and Orko (guitarist).

Currently, his only official contribution to the series is an end credit remix for the first premiere of Inside of Every Demon is a Rainbow, in October 2018.

He also made a fan song called Alastor's Game. 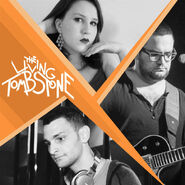