Travis is a minor character in Hazbin Hotel.

Travis is a demon of the avian variety, with owl-like "ears", facial disc and short, pointy beak. He has gray feathers all over his body with black claws for fingers. His torso appears to have buttons. His face appears to be a lighter shade of gray with his left eye having a black sclera with a red iris in the shape of a heart. Lastly, he is seen wearing a black trilby.

Travis is first seen at the beginning of the pilot, dropping off Angel Dust after the two finished performing unknown sexual acts in the car. After Angel told him not to disclose what they had done, he makes a crack at Angel before chuckling. Angel acts hurt by his statement and retorts by calling him a "sack of poorly packaged horse shit". He then tells him to say hi to his wife for him before kissing him and playfully calling him "snookums". Travis drives off, disgruntled and trying to repeat what Angel said, but is drowned out by tires squealing. 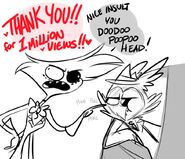 Retrieved from "https://hazbinhotel.fandom.com/wiki/Travis?oldid=27147"
Community content is available under CC-BY-SA unless otherwise noted.