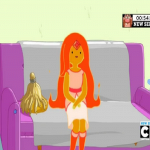 Hello! I’m Kiddo Ryder, I’m a BIG Hazbin Hotel fan. I also love writing fanfics and making theories because they are fun to do ^^ I enjoy helping people and writing down the facts I would learn from the streams and making sure that they are right. I will do my best on this wikia to make sure everything is alright and no wrong info.

Angel Dust is my first favorite character ever. The moment I first saw him in that clip "Your Fault", I quickly fell in love with him. I love how confident he is, how he can be sassy, a badass and even a total sweetheart. I mean I love that scene where he felt bad for what he did that ruined the Hotel's reputation.

See? He not a total jackass (most of the time lol) and actually do care about the people he consider dear to him.

And I love he is with his little pet pet Piggy Fat Nuggets. He would do anything to protect that pig.

I may be straight he looks hot when he's dressed in drag!

And I also love how badass he can be in the battle! He can shoot and even use a bat at the same time! It's so cool having lots of arms.

Charlie is my second favorite character in the show. I do love how she's the disney princess of Hell, I love how she basically have the guts to be herself. Once you think about it, it's basically true because even though most of the demons in Hell don't respect her, Charlie is actually braver than all of them because of how she doesn't put on a "tough guy" act and act like she's better than all of them . I like how she isn't a spoil brat because even though she's rich and have a limo and stronger powers, she doesn't use them for her bidding.

I like how her demon form looked because it's pretty awesome!

I love too how even though Charlie is a total sweetheart she is definitely no pushover because she's a total badass! I mean looked how she's kicking Katie's ass in that fist fight scene! And she didn't even have to turn into her final demon form to fight back. It goes to show that those who may look weak, can actually be stronger.

Plus she's an amazing singer!

protective of her and supporting her regardless if she has doubts in them.

I mean they are so adorable!

Plus I do love her and Angel's relationship because it's like a brother and sister relationship.

I love badass she can be with her spear.

With Alastor is a whole different ballgame. With him, I love scary and mysterious he can be. One minute he can go from a goofy guy telling Dad jokes to a blood thirsty killer the next:

I mean look at him!

What I love about Alastor is how he CHOOSE to smile. In some cartoons and movies I seen, some people are smiling by force. I love how Alastor choose to smile because to him, it shows power and dominance.

It's also interesting on how Alastor is asexual and actually have some standards. Plus I love how he sings and his powers work!

Word of advice: Don't mess with the Radio Demon!

Retrieved from "https://hazbinhotel.fandom.com/wiki/User:Kiddo_Ryder_525?oldid=17877"
Community content is available under CC-BY-SA unless otherwise noted.